'Endhiran' is the third rajini movie I watched in the big screen. The other two were 'annai or aalayam' and 'sri raaghavendra'.(rajini fans please forgive). I entered the movie hall with a pre-conceived thought that the film will be boring.

But I admit that this man has got some charisma that no Indian actor has. Especially the last forty minutes was really a celebration for the rajini fans when the spark like rajini in the role of chitti, version 2.0 appears. enna acting? I could visualize all the characters that rajini acted in his earlier days. Infact, when chitti uttered the word ‘adaan robot’ , I felt like clapping.

No other actor will be suitable to play the role of chitti other than our super star. Shankar made a correct decision of offering the role to superstar which made this film a hit.Though the film did not have a lengthy story to narrate or punch dialogues like other rajini movies , still the three hours was really exciting. 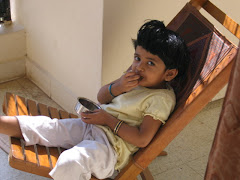